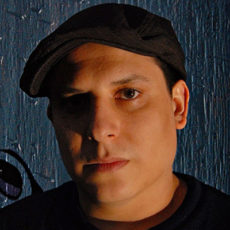 Sleep (Chris Tafoya) grew up in the old-school Mexican community of Farmington, NM. By the age of 9 he was writing and performing his own raps. Fast forward 20 years or so…he’s now married with a 14 year old daughter, a 20 month old son, and a new album that  incubated in a pressure cooker for three years. It is called “Hesitation Wounds.”

Co-founder the Oldominion crew, a conglomerate of hip-hop artists based out of the Pacific Northwest, Sleep and his people have been putting it down for Seattle and Portland for the past decade. Sleep first made a name for himself with his lighting-quick delivery and dominant stage presence, but after releasing two solo albums (Riot by Candlelight, Christopher) it was the strength of his song writing that earned him a devout following in the underground scene.

I first met Sleep in 2001 while I was in San Francisco recording my “Personal Journals” album. He was in the middle of a tour with his Oldominion crew and they made a pit stop at the anticon compound. We clicked immediately, nerding out about fast rap and magic tricks and before I knew it I had a new friend (yes, that’s weird for me.) As anyone who has ever met Sleep will attest, he is one of the most personable and genuinely kind people in the industry. When I finally got to see him perform I was astonished to see this jovial, soft spoken shy-guy transform into a rap monster on stage. But that’s the switch. That’s the explosive release of creativity and talent that people like Sleep seem to bottle up until the time is right. That’s what “hungry” looks like when you tour to keep your kids fed while pursuing your dream at the same time.

It is 8 years later and not much has changed about any of that. Sleep is still the bashful guy who looks much younger than his actual age, he still grinds it out on the road in order to make ends meet, and he’s still got tricks up his sleeve.

Sleep has stayed busy since his first solo release in 2002, but it was his “Christopher” album in 2005 that knocked our socks off. The mood of his music is simultaneously dark and upbeat…morbid and positive all at once. This paradoxical mix, along with his flexible delivery and confessional rhyme style, made him a prime candidate for the type of artist we fawn over at Strange Famous. After picking up as many copies of “Christopher” as we could, we came to a gentleman’s agreement that his next album would be released with SFR.

“Hesitation Wounds” is now available digitally and on CD! It features guest appearances by Del the Funky Homosapien, Grayskul, and boasts the production credits of Reanimator, Zevala, Smoke and many more.  “Hesitation Wounds” is  a mix of samples and live instrumentation that all assist in the storytelling of a lifelong hip-hop veteran who has much more to offer the game than brag raps. This is real life in all its complexities, compressed into 13 solid tracks, and delivered in a way that only Sleep could do.

Sleep’s 2005 breakthrough Christopher CD is now back in print! INCLUDES 2 PREVIOUSLY UNRELEASED BONUS TRACKS exclusive to this release! The album is also available as a digital download  here.